skip to main | skip to sidebar

My Secret Knife: a review of Jack the Ripper's Secret Confession 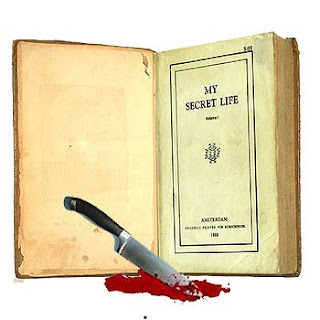 Where would Whitechapel-based walking tour companies and fly-by-night paperback publishers be without the public’s continued fascination with Jack the Ripper? Yes, ever since Saucy Jack stalked those darkened backstreets near the old City at the close of the nineteenth century, the Ripper legend has continually piqued the interest of generation after generation of rubbernecking gorehounds and Angela Lansbury-esque armchair sleuths alike, resulting in an almost endless stream of theories about his identity and almost as many gaudy books to back them up.

For anyone unacquainted with My Secret Life, the story goes something like this. Between 1888 and 1895 a Belgian peddler of erotica, Auguste Brancart, was summoned from his adopted city of Amsterdam to London by “a rich old Englishman, who desired to have privately printed for his own amusement a huge MSS”. What this manuscript contained was nigh on a million words of an anonymous erotic memoir, allegedly drawn from the author’s diaries of his day-to-day amatory life. Over a period of some years, and involving a chain of smugglers, stooges and rogue printers, this manuscript was printed up in 11 volumes, comprising some nearly 4000 pages in total (including a more-than-thorough 56-page index). According to the author only six copies of the whole work were printed, although as researchers Ian Gibson, Steven Marcus and others have demonstrated, a great many more copies were printed up than that. The book sold for the then-astronomical sum of £100 a set and was marked ‘Not for publication’ on its title page. This isn’t surprising: the content of the book is about as obscene as it’s possible to imagine. The author narrates his sexual development from childhood onwards, detailing literally thousands of copulations and other sexual indiscretions and exploring every possible type of perversion. Attempts to publish the book over the course of the 20th century met with bans, obscenity judgements and prison sentences, and it wasn’t until 2004 that all eleven volumes were finally made available online (at this location).

However, Gibson’s work and research rather scuppers Monaghan and Cawthorne because of one crucially important conclusion reached by the author: My Secret Life is a work of fiction. Despite the book presenting itself as memoirs drawn from a diary, a number of internal inconsistencies coupled with the sheer unlikelihood that anyone could possibly live as ‘Walter’ purported to do, mark it out as a fantasy autobiography rather than a true record of a life lived. Beyond this, Gibson demonstrates fairly conclusively from comparisons with Ashbee’s diaries that he and Walter share the shame stylistic tics as writers, the same problems with spelling and syntax, and the same character traits. And if Ashbee was the writer of My Secret Life, which he is generally assumed to have been, any possible link between ‘Walter’ and the Ripper completely breaks down. The very nature of Ashbee’s life as a businessman, author, head of a family and social butterfly are utterly at odd with what we know of the Ripper’s character and the facts of his killing spree.

I have to confess a personal fascination with the life, work and character of Ashbee. As he is described in the few books which exist about him, he amuses me enormously, and so I thought I’d buy …Secret Confession to see if there was any possible way that Henry Spencer could have been the Ripper. Unsurprisingly I came away from the book unconvinced.

The reasoning advanced by Monaghan and Cawthorne is at times ingenious and a glowing demonstration of their ability as lateral thinkers, but rests largely on the Christian names of one or two of the prostitutes mentioned in My Secret Life corresponding with those of the murdered girls in Whitechapel, as well as a few overlaps in locations described in the book and those in which the Ripper crimes took place. The writers also place their own interpretation on phrases in My Secret Life, making assumptions and guessing at (nonexistent) double meanings in order to bolster their case. Beyond this they rely on amateur psychoanalysis to arrive at the conclusion that Walter was a killer. The writer of My Secret Life certainly put a great deal of aggression into his work and expresses a fascination with the blood associated with sex acts (although it must be said that he expresses a fascination with anything even remotely connected with sex), but the authors’ assertion that Walter was a murderous paedophile who killed the girls who procured him young virgins is overstating the case and a quite unsubstantiated assertion. And besides, if My Secret Life was the work of Henry Spencer Ashbee, the book is very unlikely to bear much, if any, relation to the author’s actual life, movements and experiences.

That said, Jack the Ripper’s Secret Confession is quite the page-turner. The authors quote liberally from the more lurid episodes in My Secret Life, which are as shocking (and consequently entertaining) as you might imagine, as well as from reports into the underworld of 1890s London, and spare no detail in describing the Ripper murders. Of course this is material that’s been reshuffled many, many times for countless Ripper books, but not being particularly interested in Jack the Ripper myself, the book revealed to me a wodge of facts about the case and Victorian society at the turn of the 20th century of which I was previously unaware. The writers’ tactic of alternating chapters which focus heavily on the facts of the Ripper murders with others focusing intently on My Secret Life is effective and makes the book seem pacy and urgent. And, as My Secret Life is not easily available as a book, nor a particularly quick or easy read, the quotes picked out in …Secret Confession are of such a length as to be almost a précis of that work, which is jolly useful. The mixture of extreme sex and extreme violence, which is what the book essentially boils down to, is well chosen, and the authors have been able to serve up their lurid source material in great and graphic detail whilst maintaining a scholarly air. While this book won’t tell you who the Ripper is (nor indeed will it firmly settle on the authorship of My Secret Life for that matter), it will entertain and engage you ‘til its end. Even approached with as sceptical a set of prior assumptions as my own, the book is an entertaining summary of the agreed facts around Jack the Ripper, a whistle-stop tour of late-Victorian London and an engaging discussion about one of English literature’s most hotly debated and notorious works, all of which are assets of the work to be commended. Well worth a read, but make sure to pick up a copy of Gibson’s Erotomaniac as a companion to avoid the potholes of occasional far-out and slipshod reasoning within.

Why is Jack the Ripper so interesting do you think? The fact that he was never caught? Especially when the murders were so horrific (still regret looking at those photos) that whoever did them must have been a very, very disturbed person yet how many books have been written about different people who might have done it? Were there that many murderous lunatics on the loose? After reading the Erotomanic myself it doesn't sound like Ashbee had a penchant for wandering the streets of whitechapel, just somebody who enjoyed his referencing possibly a bit too much ;)

Get professional trading signals delivered to your mobile phone every day.

Start following our signals NOW and gain up to 270% per day.

eToro is the ultimate forex broker for beginning and pro traders.